This week, I am continuing a series of posts on due diligence and decision making across different asset classes. Here’s the link to see the first post in the series on poker as an asset class: Link

Due diligence varies substantially across asset classes, and I believe that different investors are better or worse suited for investment in different assets based on how characteristics of asset class decisions match an individual’s personal preferences. I will continue to use the overall framework developed in the last post in order to analyze the decision characteristics of venture capital (VC) against that framework. I’ll end with analysis of the due diligence performed in VC, and discuss the typical investor traits necessary to be successful in VC.

Based on my experience, there are 7 decisions characteristics that I believe inform how these decisions are made and subsequently whether you are suited for due diligence of an asset class:

My analysis will center on early-stage venture capital, which is the only segment I’ve had experience in. The later stage you go in VC, the more the asset class looks to private equity, and eventually public equity investing.

Frequency of Decisions: Sourcing decisions happen daily for VCs, whereby they say no to spending time on startups. Actual investment decisions are relatively few, with most partners leading an average of 1-2 investments per year.

Distribution of Outcomes: Venture capital investments exhibit power law behavior, as pointed out by many prominent VCs such as Peter Thiel. I am not privy to VC returns, although some such as the Kauffman Foundation have published copious data on returns to help triangulate. Below is my approximation of how outcomes look in VC as compared to poker for an individual professional poker player or a partner at a VC firm. 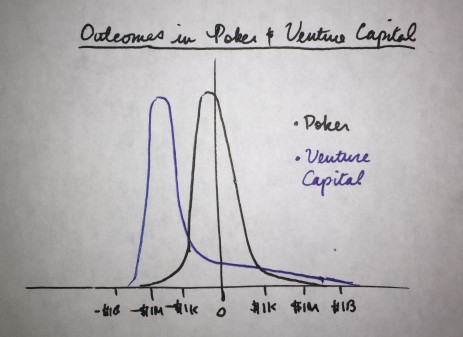 There are several conclusions and assumptions embedded in this drawing:

Length of Decision Impact: Active VC investors may live with their investment decisions for a very, very long time. Good VCs with a board seat are engaged with their portfolio companies on a day-to-day basis beyond attending meetings once a quarter. The Kauffman Foundation reported many funds have not fully unwound positions more than a decade into the future. Thus, the impact of an investment decision is substantially longer than say poker or sales and trading.

Decision Uniqueness: Decision Uniqueness is extremely high for VC, with each investment having different people, products, and industries. While some VC firms try to specialize to some extent, the decisions still look very different from one deal to the next. It’s incumbent upon VCs to do their own homework and be familiar with a portfolio company’s industry if they hope to have even a chance of adding value.

Stakeholders: VC investments have a very complex set of stakeholders. VCs have both a fiduciary responsibility to the investors (also known as limited partners or LPs), and a fiduciary responsibility to the shareholders of the companies (including founders, employees, and other investors) whose boards they sit on. These stakeholders tend to be more aligned when things are going well, but things can get more complicated if things are going poorly.

Accessibility to the Public: Most VC deals are extremely proprietary, and limited to a small handful of investors. Prior to the adoption of Regulation A+, investing for individuals was limited to accredited investors. Although Regulation A+ has expanded accessibility to venture capital, it’s likely that the best deals will still be proprietary to a handful of VC firms, and mostly inaccessible to the public.

Ownership of Outcomes: Traditional VCs invest someone else’s money, typically money from their Limited Partners (LPs). Although management fees can help reduce VC reliance on carried interest as a salary, Jason Lemkin and others have written about how the capital contributions that General Partners (GPs) are required to put in to help align incentives with the LPs can nullify the salary you get through management fees. This means that VCs have relatively large ownership of outcomes, since they are giving up a substantial amount of immediate cash flow for hopefully large, future carried interest cash flows.

Due Diligence and Investor Traits in Venture Capital

Although venture capital is often compared to poker, there are a number of decision characteristics that dramatically affect how due diligence is performed, and what traits to look for in investors. The relatively small number of investment decisions coupled with the very long 10+ year decisions means that VCs are very “all-in” with individual investments, much more so than a poker player who plays many hundreds of thousands of hands a year. Thus, VCs must be very long-term focused, and willing to be patient and wait for out-sized results far in to the future.

The distribution of outcomes for VC investments also has a substantial impact. Because so many startups ultimately fail, and the fact that 1 or 2 portfolio companies could make or break a fund, VCs really have to swing for the fences with every deal they take. This is in heavy contrast with poker, where professional players are focused on squeezing small edges over a large number of hands. On a day-to-day basis, sourcing tends to be focused on finding reasons to say yes, with a key question being whether or not a startup can make it to the far right end of the power law tail. VCs attempt to filter through hundreds of startups and founders a year to get to 1-2 ultimate investments. As a result, VCs say no to spending more time on startups on a daily basis, often with only a light amount of diligence. While this does mean that they sometimes say no to great deals, this is largely a function of the frequency of decisions and distribution of outcomes.

For those startups that DO make it through the sourcing funnel, VCs perform due diligence in a very different manner than later stage private equity investors.  Because the decision uniqueness is so high in VC, there are usually few if any comparable companies or products. This makes it nearly impossible to accurately forecast the future trajectory of the company. This stands in stark contrast to later stage private equity deals, which generally involve companies with tens or hundreds of millions of dollars a year in real revenues and profit. Private equity stage companies have a relative dearth of information available to analyze to assess the potential of an investment. Little data usually exists for many startup markets, and VC diligence tends to be relatively qualitative as a result.

While people of many backgrounds ranging from finance to journalism have succeeded as VCs, I have seen a few common traits among the VCs I’ve met:

It’s clear that while there is overlap between poker and VC, there are some decision criteria that dramatically change how due diligence is performed, and subsequently who is best suited for each. For more insights specific to VC, check out my previous post, What I Learned About Venture Capital This Summer, which goes more in-depth into who is best suited for VC. Next week, I’ll dive into private equity to attempt to tease out why it looks so different from both VC and poker, despite the fact that VC is technically a subset of private equity.